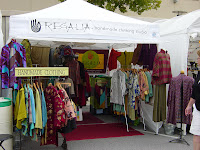 The Pinnacle Hills Arts Festival is over! I set up in a frenzy with over a hundred talented “studio” artists on Friday, Sept 11th watching the skies and wondering if anyone would question me bringing clothing to an Art show. I kept saying to myself “I AM an artist- I create in the same way, I look for the same muse, and I have every right to be here”. Everyone was super nice, and supportive of this new endeavor, and very complementary on my craftsmanship. I had sent out postcards to women on my mailing list from the area, and they were there in force, so it was like old home week. I sold lots of new things I had created just for the show, and many return clients ordered more of the same garments they had been loving for years, in new colors. They had great things to say about the longevity and classic-ness of what they’ve bought in the past, and that was great for me to hear. The event was three days long, and the threat of rain was high, but we kept back the water with sheer mental power, and I made it back home mostly dry.

Some friends talked me into setting up at this fairly new festival, and I’m glad they did. At first I thought I wouldn’t be able to switch gears- we are in the middle of changing locations (yes, AGAIN)- the new space is being remodeled and everything is in boxes, some moved, some left behind until after the show. After three days of moving, we set up the machines and got busy cranking out jackets, digging through boxes to find buttons, thread, scissors, and making a layer of mess over the existing mess. (The day after returning from the show I finished the move, which put another layer of mess over the previous two, so now I really have a job in front of me.)
In the next posting I’ll show you the new storefront, and maybe the mess inside. I’ll also explain more about why I’m moving again. For now, I say “Thank-you” to everyone that came and bought my clothing and said sweet things to me. Thank-you to the friends that talked me into going on this venture, and helping me move, paint, and sew. And a big thank-you to the Sky-spirits that held back the rain until I was tucked into my cozy bed after the last rack and zipper-bag was put away safe and dry in the nice new studio. That patter of rain starting as I drifted off to a well-deserved sleep made me really smile.

Until the Covid-19 problem is behind us, I am only focusing on face mask construction.

To see what I offer, visit my retro website-